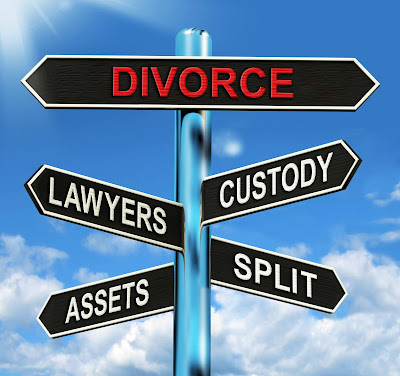 Project Self-Sufficiency will host a virtual Family Law seminar on Tuesday, December 7th, 6:00 p.m.  Attorneys and participants will discuss child support, grounds for divorce, court procedures, alimony, parenting time, equitable distribution of assets, and other topics related to divorce.  The presentation, which will be offered through Zoom, is free and open to the public; interested attendees should call Project Self-Sufficiency at 973-940-3500 for log-in details.  The agency’s legal seminar series is a program of the Sussex County Family Success Center at Project Self-Sufficiency and is funded by the New Jersey Department of Children & Families. 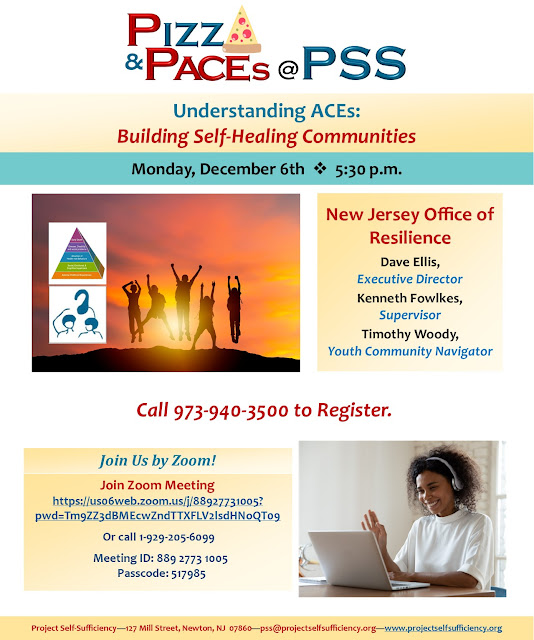 The public is invited to a virtual, interactive workshop about building self-healing communities in the aftermath of trauma, Monday, December 6th, 5:30 p.m. presented by Project Self-Sufficiency.  The gathering is the next installment of the Pizza & PACEs series hosted by the non-profit agency which is designed to facilitate the conversation about issues surrounding Positive & Adverse Childhood Experiences (PACEs).  Experts from the New Jersey Office of Resilience will address how the brain adapts to traumatic experiences, the genetic impact of trauma across generations, health and social problems caused by trauma, and methods communities can use to institute positive change.  Featured speakers will include New Jersey Office of Resilience Executive Director David Ellis, Supervisor Kenneth Fowlkes, and Youth Community Navigator Timothy Woody.  The presentation is free and open to the public, but advance registration is required.  Interested attendees are invited to call the agency to register and receive log-in details.

Adverse childhood experiences are widely recognized as falling into three distinct categories, abuse, neglect, and household dysfunction.  Examples of negative behavior said to result from Adverse Childhood Experiences include smoking, alcoholism, drug use, absenteeism, and lack of physical activity.  These behaviors can cause a cascade of physical and mental health problems, from diabetes to cancer to suicidal thoughts.  It is estimated that approximately 67% of the population has experienced at least one adverse childhood experience.

The new Pizza & PACEs sessions build on the work already underway at Project Self-Sufficiency.  Trauma experts and guest speakers address the impact of adverse childhood experiences on social, emotional, and cognitive development, and offer tips and strategies for building resiliency at regularly scheduled workshops.  The agency’s PACEs program brings together professionals, providers, and parents who are committed to increasing awareness of the impact of childhood trauma on juvenile development, future violence victimization and perpetration, and lifelong health and opportunity. 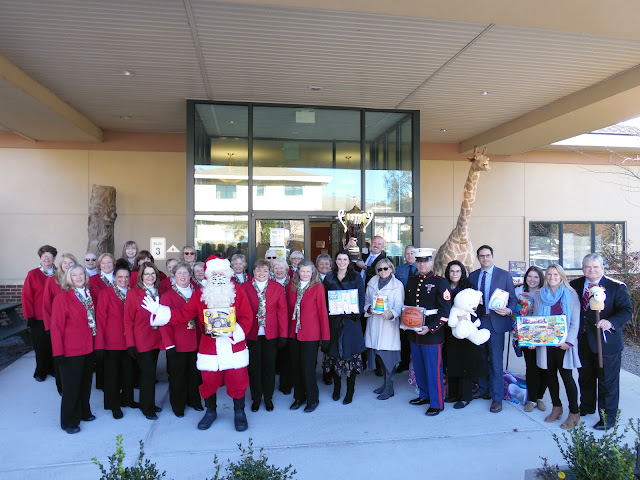 The annual Season of Hope Toy Drive was launched by Project Self-Sufficiency and a consortium of businesses, schools, and social service agencies today.  The massive undertaking aims to provide gift cards and new, unwrapped toys to parents and caregivers of more than 2,000 children and teens in the New Jersey counties of Sussex and Northern Warren.  The toy drive is a joint effort which is driven and coordinated by Project Self-Sufficiency, along with its community partners, to benefit local families in need.  Donations are needed immediately and can be made in-person at the Newton agency.  Additional toy drop off sites throughout the area will be added shortly.  Monetary donations are also accepted online.

“We are searching for individuals, youth groups, social service agencies, scouting troops, moms’ groups, churches, and other organizations which will step in and coordinate gift card and toy drives on behalf of the low-income families in our area,” noted Deborah Berry-Toon, Executive Director of Project Self-Sufficiency.  “The Season of Hope Toy Drive directly benefits Sussex and Northern Warren County families in need.  The items collected here stay right here.  It truly is a way for neighbors to help each other during this extraordinarily challenging time.”

The annual Season of Hope Toy Drive has served thousands of children and teens in northwestern New Jersey for many years.  The initiative solicits donations from individuals, businesses, civic organizations, schools, youth groups, athletic teams and other groups throughout November and early December.

“Each year during the holidays, the Season of Hope campaign helps bring joy and happiness to thousands of disadvantaged children.  I am always pleased to take part in such an enriching and joyful event,” said New Jersey State Senator Steve Oroho. “As we are still dealing with the effects of the pandemic, so too have many children’s lives not returned to what they were in 2019.  Because of this, I hope those who are able can contribute this year to bring much good cheer and smiles to many needy children and their families."

"Christmas is always an exciting time at Project Self-Sufficiency, where the spirit of Santa Claus sweeps across the county creating a sense of wonder and hope for children of all ages,” Sussex County Commissioner Sylvia Petillo added.  “Thanks to the overwhelming donations from our community, Christmas morn for countless families will be bursting with giggles, smiles, thankfulness, and love."

Area elementary schools, middle schools and high schools have been invited to participate in a competitive “Stuff the Stocking” campaign.  Toys are picked up and counted in early December; 29 schools have registered to date, a slight decline from previous years which organizers attribute to the impact of the on-going public health crisis.

The Season of Hope Toy Shop benefits from the talents of hundreds of musicians each year; music for the kick-off press conference was provided by Harmony in Motion.  Normally, individuals and ensembles perform holiday tunes in multiple locations on the PSS campus throughout the duration of the two-day toy shop in December.  Due to current public health restrictions, patrons will not be allowed inside the buildings this year, so shoppers will be entertained by a hybrid of livestreamed and previously recorded performances by ensembles and individual musicians.

“The pandemic has upended business as usual for our day-to-day operations and the Season of Hope Toy Drive has also had to be significantly modified to comply with social distancing guidelines and other factors,” explains Project Self-Sufficiency Executive Director Deborah Berry-Toon.  “Traditionally, the toy shop is operated during a 2-day period in mid-December and welcomes the assistance of hundreds of volunteers, law enforcement personnel, and musicians as we help thousands of parents select toys for their children.  Under the current circumstances, the toy shop will now have to operate during November and December and public health guidelines prohibit the presence of numerous staff and volunteers on site.  Therefore, we are asking that donations of funds, gift cards, and toys be received by early December.”